One of my pride and joy has been able to sustain an oriental hibiscus plant (indoors) through the vagaries of British weather, and in return I’m blessed with vibrant red hibiscus flowers 3-4 times in a month, sometimes more. Here is a study of a hibiscus flower in original (untouched or processed, exported from Lightroom), B&W rendition (processed in Silver Efex Pro), processed using Color Efex Pro filters to bring out detail.

I like the picture as it was from the camera (untouched). Why process a picture if it doesn’t really add anything more to the photograph?

Thanks for stopping by, and please do leave a comment on what you think?

My previous two posts on the same subject commented on the germination, and growth of calabash and other indian vegetables in the UK. Unfortunately for us here in the United Kingdom, this was the wettest summer in the last 100 years. With lack of sunshine and lots of rain, many of the experiments I had planned to conduct on the efficacy of growing traditional indian vegetable came to nothing.

However, it was not all doom and gloom, and I’ve actually managed to harvest a few calabash (lauki, dudhi) this year (see picture below). The plants are now well over 10 feet long and have many young fruits on them (sadly, I think the winter will catch up and kill them before they get a chance to mature).

I have also had limited success with indian green aubergines (but not spectacularly).

At the end of the year, these are the lessons I’ve learned.

You may wish to read the previous blogs on the same subject:

My last post in March on this subject dealt with the sowing and germination of often sought after indian vegetables that are difficult to grow under the temperate and wet conditions of the United Kingdom. This growing season has been one of the worst in the UK, with record rainfall and plummeting temperatures. As a result, the seedlings have had a long stay in the germinator and pots in a makeshift greenhouse. Ideally, the plants should have been out in their final positions by the beginning of May, but due to inclement conditions, they were only put outside in the beginning of June this year.

Lauki (Calabash) – The young plants have all survived the first growing phase, and were planted into plastic containers, with supporting stakes to give support to the delicate stems of the plant. Once the plants reached about a foot tall, they were trained on a trellis to enable their tendrils to twine around the support. The plants are in a sheltered place in full sun to maximise their chances of growth. The potting medium was one part topsoil, 2/3rds well-rotted compost and 1/3 grit to give good drainage.

Unfortunately, none of the ridged gourd (Turai) or bitter gourd plants made it to this stage, and died due to damping off disease brought upon by the unseasonal spring/summer this year. I have planted new seedlings using the methods described before.

The calabash plants are now flowering profusely. As with all members of the Cucurbitaceae family, the flowers are either male or female. In most members of this family of plants, that include courgettes, pumpkins, cucumbers etc, male flowers are the first to emerge and can be easily identified by their absence of a fruit-like growth at the base of the flower. The female flowers appear a little later. 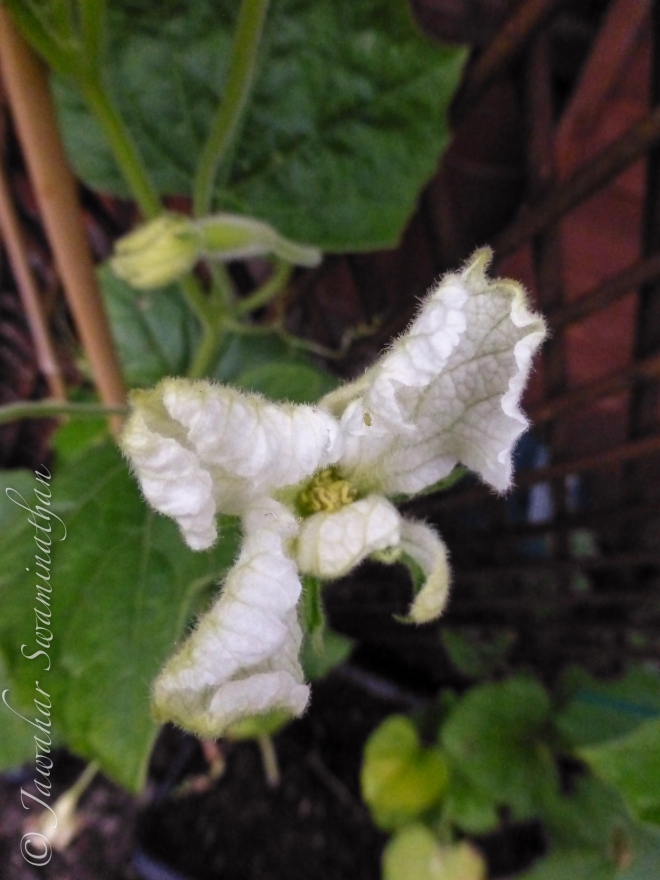 The female flowers are easily identifiable by the presence of a fruit at their base (as in the picture below). 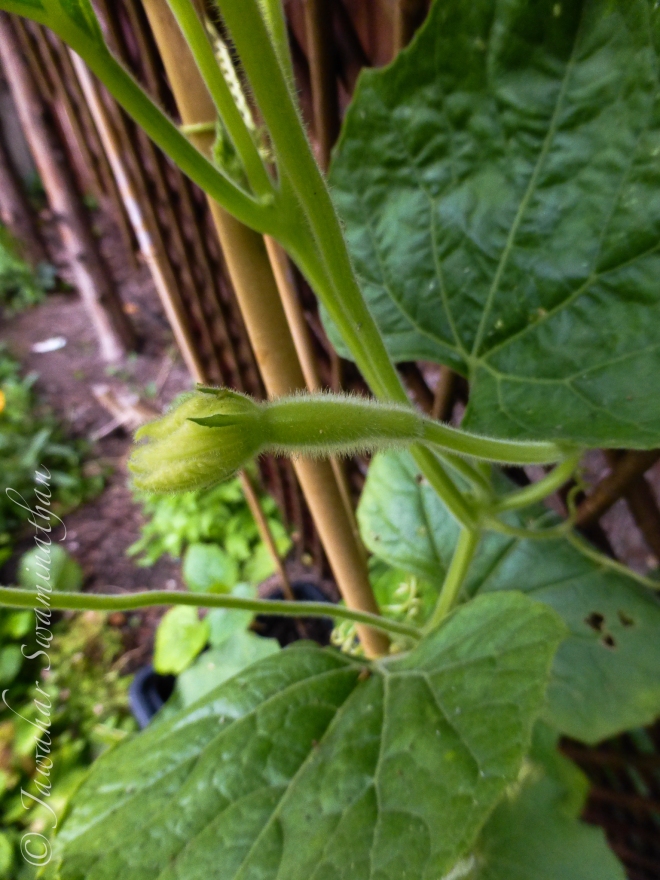 These plants also branch extensively so it is a good idea to have a trellis or netting that allows for side shoots to grab and grow.

Now it is just an issue of wait and watch while the plant grows taller and hopefully produces decent sized gourd for consumption.